The title of this book translates as "Eurasiers Today".  Written by Annelie Feder, who is the President of the original Eurasier Club in Germany,(EKW).   This book has a wealth of information specifically about Eurasiers.  Your 6 month old weighs 18 kg - normal?  Too big? too small?  This slim, hardcover book tells all, Extensively illustrated with full colour photos, charts and illustrations, it comes with a separate translation of the text. from German to English.  An essential for any Eurasier owner, it is very highly recommended for your library.

Not available off the internet or in local bookstores, if you are interested in obtaining this book and the translation, please contact The Eurasier Club of Canada at info@eurasiers.ca 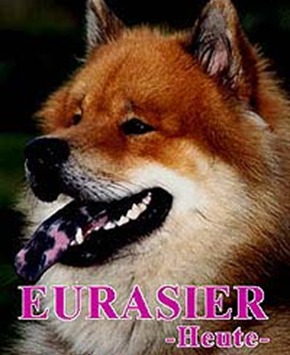 History of the Eurasier

Where did the Eurasier come from?

The Eurasier was developed in Germany.  The very first litter was born in a town called Weinheim in 1960.  A man called Julius Wipfel set out to re-create the ideal family housedog.  He had obtained a mix breed dog from Canada and called him "the Canadian".  He was such a great family dog that when he passed away Julius Wipfel took it upon himself to re-create a dog just like him.  Originally Dr. Wipfel used a combination of specially chosen Chow Chows and Wolf Spitz.  The Chow Chow that is around North American now is not all like it was during the 60's.  The European Wolf Spitz was similar to the old  American Keeshhond.  The combination of these breedings were registered as a "Wolf Chow".  A number of years later in 1972 the Samoyed was introduced to the breed which caused a bit of dissension among the Wolf Chow group, however, the outcome was the Eurasier as we know it today.  In 1973 The Eurasier was recognized by the VDH (Verein fur das Deutsche Hundewesen) and the FCI (Federation Cynologique Interenationale -  International Dog Federation).

The Canadian Kennel Club recognized the Eurasier as a pure bred dog in 1995 and placed them in the Group 3  (Working Dogs).  People often ask me what their purpose is and I reply they are companion dogs, that is their job.